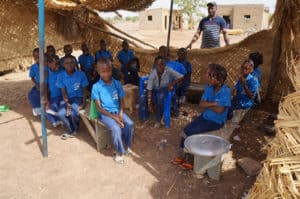 Ferryspeed’s Guernsey General Manager Martyn Langlois has raised £24,000 to help some of the poorest children in Burkina Faso through Christian charity Compassion, thanks to the generosity of friends, family and businesses.

Following the death of his wife, Martyn and his family wanted a lasting legacy. Martyn discovered that one of the seven children he sponsors, Amelie, who lives in Burkina Faso, was attending school under the shade of a tree.

He approached Compassion about using his wife’s legacy and the charity suggested building two classrooms. Martyn began raising the £11,245 needed to cover the cost.

“An amazing amount of people gave money in memory of my wife. We were also supported by clients and companies, including a local garage, Specsavers and Ferryspeed. In fact, the money kept coming in even after we’d reached our target,” said Martyn, who has worked for 34 years at Channel Express and then Ferryspeed. 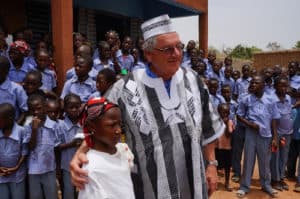 Once the classrooms were built, Martyn went to the village in Burkina Faso last year to officially open them. While there, Martyn discovered that 180 children from another village were without classrooms.

With the surplus money from his initial fundraising drive, further new classrooms are now being built at a cost of £12,500 and are due to be completed early next year.

“My wife would be staggered at everything that has been done in her memory, and we’re particularly delighted that another set of classrooms is being built. We like to think of what we’re doing as a living legacy,” added Martyn.

For more information about the work of Compassion, please visit: www.compassionuk.org

Back to: Charities We Support