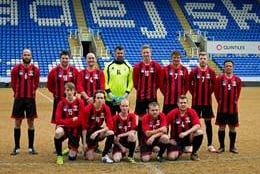 More than 100 spectators flocked to watch a charity pitch day which raised £6,100 to help reduce the frequency of young sudden cardiac death.

The Madejski Stadium in Reading was in the spotlight on Sunday 31 May as supporters and well-wishers gathered to watch four 11-a-side teams play two matches in aid of the charity Cardiac Risk in the Young (CRY).

The successful event, which was featured on BBC South Today news, was bolstered by support from a range of businesses including Ferryspeed; we sponsored the event by placing an advert in the match day programme which was handed out free of charge to spectators as they entered the stadium.

It was the second consecutive year that we’ve supported the charity pitch day. Last year, the organisers Sean Reading and his friend Phil George raised almost £4,000 at Fratton Park.

Sean lost his brother Ed while playing football eight years ago and set up a five-a-side league, called Edstreme, in his memory.

The first match of the day was a local architects derby between Helyer Davies Architects (HDA) and Holman Reading Partnership, and resulted in a 15-nil score to HDA – five of goals were scored by Sean.

The second match between Portsmouth Historic Dockyard and HASAG, a charity which supports asbestos disease sufferers across the south, saw a 9-nil victory to HASAG.

“It was a poignant day and we were really pleased with the turnout,” said Sean, who has raised over £12,000 for CRY through football. “Over 50 players put tremendous effort into the games and there was great banter on the pitch.”

“About 75% of the spectators were family and friends from the football league, so there was a great atmosphere, and about 25% of spectators were Reading fans. We were also delighted with the brilliant coverage from South Today and as a result, CRY said there’s been an increased number of hits from the South of England on the charity’s website,” added Sean.

Ferryspeed has a long-term reciprocal relationship with Holman Reading Partnership, which is run by Sean’s father Steve Reading, and the architects is based on the same site as Ferryspeed.

Dean Sotnick, Ferryspeed’s Sales and Group Director said, “Sean and Phil’s hard work over the last year really paid off and we’re delighted that the event was such a success.

“They raised a phenomenal amount of money and it was a privilege for Ferryspeed to be able to support the event and this worthwhile charity,” said Dean.